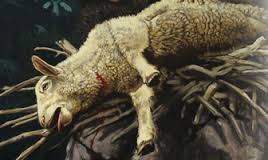 Sacrifice was emphasize all through the Old Testament. There is so much significance place upon it but what is it really about? Is it mainly about the blood and death? But many of these sacrifice have nothing to do with blood because it involves vegetables and fruits. God took the issue of sacrifice seriously because it was a shadow of the things to come, it embodies a divine principle. Sacrifice is not just about offering somethings to God but it is about giving all to God by offering a portion. It is about securing God's right and worshiping Him as Lord. In the Old Testament the concept of first-fruits, tithe and sacrifice on the altar all embodies this divine principle that God's right must be secured on earth in order for blessedness of His reign to be made manifest in this world.
In the Old Testament a portion of every fruit of the land was sacrifice to God so that Israel would continue to see the blessing of God's reign in their land. A portion of the harvest and a portion of the livestock of the land is sacrifice to represent God's ownership or Lordship over the whole of the land. Sacrifice however is worship, it is the way God is worship. Worship to the Old Testament people is not singing and dancing but the offering of sacrifice upon the altar. This is how God is worship in the temple in Jerusalem. God is not worship by simply singing and dancing but by securing His right over all, by acknowledging His Lordship and yielding to that Lordship. 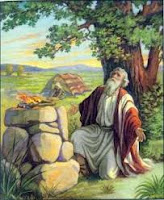 We return all to Him by giving a tenth, the first-fruits or a portion and we re-insure Him of His right and ownership over all. This is true worship, this is the way to reverence the Lord.
Ever since Adam sinned Satan have been lord over the earth and God wanted to win back the lordship of the world. So God started by securing His Lordship over a people and a land on earth which was the Israelite and Canaan land. This was achieve through the Jewish religious system that was centered around the temple and the altar. There must constantly be sacrifice on the altar in order to secure God's right over the people and the land. Without this God cannot express His reign in the land but the land wasn't the final goal, God wanted the whole earth. Therefore another altar needed to be set up, an altar universal and all-inclusive. An altar by which He would win back all of the earth. This altar would be gigantic and on it would be sacrifice a tenth, the firstfruits - and yes, a portion of the earth that would represent the whole earth and secure God's right and Lordship over all. But this altar must be so powerful that it would transcend the natural and establish itself in the heaven-lies where the rulers of the world dwells. The altar must be utterly spiritual, for the spiritual rules over the natural. There at the center of the earth, the capital of the world God erected an altar and sacrificed upon it a tenth, the first-fruits - a portion of the earth. And that sacrifice was Christ together with all those that constitute his body. The Bible reveals that "Christ is the first-fruits..." (1Cor 15:23) and it also says that, "Of his own will begat he us with the word of truth, that we should be a kind of first-fruits of his creatures." (James 1:18).
The sacrifice that won and secures God's right over the world is Christ and his body the Church. And as long as this sacrifice remains on the altar God can express His reign on earth and claim His right over the world. Sacrifice means death, it means complete utterness to God. Until the Church get to a place where she is utterly dead to herself and utterly for God she haven't given God true worship and God cannot fully exercise His right and His reign on earth. God cannot fully express His will on earth (for God's reign is the expression of God's will) and "The Lord is..., not willing that any should perish, but that all should come to repentance." (2Pete 3:9). But people are perishing because God cannot fully express His will on earth and He can't express His will (and win all those souls for Himself) because His right over the world have not been secured. The Church cannot be a force to be reckon with on earth until she learn true worship and knows how to stay and remain on the altar as a sacrifice in Christ to God. The secret of having a larger harvest and displaying the mighty power of God on earth is simply the sacrifice.
By David Emechete at May 19, 2016

Centrality And Supremacy Of Christ

You can now translate this blog to your language